Tigard Station 51 is back in business.

When firefighters weren’t responding to incidents during their 24-hour shift, they made quick work of unpacking boxes, unloading equipment and settling into their newly remodeled station.

This week marks the first time that the four-person crews of Truck 51 and Heavy Rescue 51 have worked out of the same location since June 2014, when operational and seismic upgrades on the station began.

“We’re really excited to be back at Station 51,” said Capt. Craig Lyon. “Our technical rescue team is reunited, and we’re pleased to have more space to store the specialized equipment we use for trench rescues, major motor vehicle crashes, and other complex incidents. The seismic upgrades also improve our ability to respond during an earthquake.”

For the past nine months, Truck 51 has worked out of nearby Station 50 on Walnut Street, and Heavy Rescue 51 was temporarily reassigned to Station 53 along Scholls Ferry Road and Hall Boulevard. 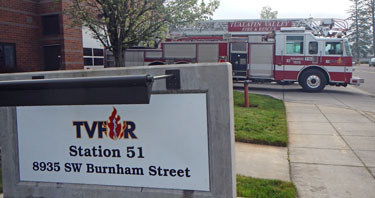 In addition to these strategic resource-placement adjustments, a 40-hour medic unit was assigned to respond out of TVF&R’s Command and Business Operations Center on Dartmouth Street during peak call shifts to ensure response times to the Tigard area were not affected during construction.

By choosing to temporarily move crews and apparatus to other nearby stations instead of setting up a modular unit at the downtown Tigard location, TVF&R was also able to save taxpayers as much as $400,000.

“During the planning phase of every capital construction project, we are mindful of taxpayers’ investment in us and explore opportunities to save money while ensuring fast and effective emergency response to the communities we serve,” said Fire Chief Mike Duyck.

Improvements to the building include seismic upgrades to reinforce the facility, ensuring emergency response following a major earthquake and compliance with state law and local building codes; installation of an interior sprinkler system; and the addition of accommodations for female firefighters.

“We’re so grateful for the community’s support," Lyon said.