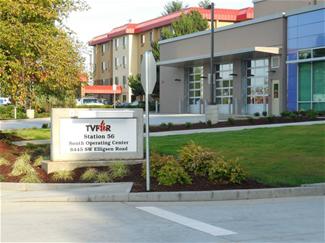 Fire Station 56 houses an engine and a truck company. It includes working and living quarters for 12 firefighters (four per shift at this time), and two and a half apparatus bays. The building also has office space for Integrated Operations staff (division chief, battalion chiefs, assistant fire marshal, deputy fire marshals, and a public affairs officer).

Integrated Operations staff are responsible for managing the emergency operations of TVF&R Fire Stations 34, 52, 56, 57, 58, and 59, as well as, the community and governmental affairs, fire prevention, investigation, and public education programs for the communities of Wilsonville, West Linn, Tualatin, Durham, Rivergrove, and unincorporated portions of Clackamas County.

Why was the station rebuilt?

Built in 1979, the building was formerly the headquarters of the Tualatin Rural Fire District. While the location worked great from a response perspective, the combined fire station and office space had major structural and design deficiencies, and was undersized for today’s emergency operations staffing and equipment needs. Seismic concerns were also significant and would have required millions of dollars to retrofit the building. Additionally, the Fire District was leasing commercial space in Tualatin for its South Operating Center. Combing the fire station and office space enabled the District to terminate the lease – a cost savings of approximately$87,000 a year.

How was the construction project funded?

The Station 56/South Operating Center project is one of many projects being underwritten by a $77.5 million general obligation bond approved by 68.6 percent of voters in November 2006. The projects funded by this bond are occurring throughout our entire service area and are expected to improve and maintain our response to emergency incidents. Over the life of the bond, the average cost to the typical homeowner is expected to be approximately $29 per year.

The construction project, which was originally estimated to take between 12-18 months and contracted at $5.6 million, was completed on time and on budget.